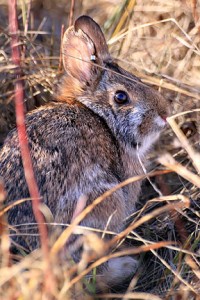 Londonderry NH  - Participants in Stonyfield Farm's 5K  walk/run and free Earth Day Fair on Saturday, April 20, 2013, in Londonderry  will be helping bring a native rabbit back to New Hampshire's landscape. Each  year, Stonyfield donates a portion of the proceeds from the event to an  organization - this year, donations will go to the New Hampshire Fish and Game  Department's Nongame and Endangered Wildlife Program for work restoring the New  England cottontail.

For more information on the race and Earth Day fair, visit  http://stonyfield5k.com.

Stonyfield Farm provides habitat for one of the last  remaining populations of New England cottontail in New Hampshire. "The  population of New England cottontails occupying the landscape around the  Stonyfield site is possibly the largest in the state," said Heidi Holman,  a wildlife biologist with Fish and Game's Nongame Program and the leader of the  cottontail restoration project. "Their collaboration in creating habitat  has boosted the population of this endangered rabbit in the area."

Initially, just two of the 11 acres at the Stonyfield  site were suitable for the rabbits, which need thick shrubby growth for food  and protection from predators. Only 1 or 2 native rabbits were documented in  the area before work began to make space for young forest to grow. Four years  later, suitable habitat conditions have developed. Today, some 5-10 New England  cottontails can be found throughout the entire 11 acres of habitat.

"The U.S. Fish and Wildlife Service is excited to  participate in the 5K and fair and encourages people to learn about the New  England cottontail and the race to save the region's only native rabbit," said  Anthony Tur, New England cottontail coordinator for the U.S. Fish and Wildlife  Service. "We also commend Stonyfield for their efforts in New England  cottontail conservation. The restoration project at Stonyfield Yogurt Works has  been the most successful project so far, with positive results for habitat and  the rabbit population."

The Nongame Program and the Service's New England Field  Office will host a scavenger hunt during the children's race and a booth with  fun New England cottontail activities and important information about the  conservation effort.

Restoration of New Hampshire's only native cottontail is  a major effort among six states to restore their population and protect them  before they disappear forever. New England cottontails are endangered in New  Hampshire and are a candidate for listing under the Federal Endangered Species  Act. They occur in parts of southern Maine and New Hampshire, Massachusetts,  Connecticut, Rhode Island and southeastern New York. Their current distribution  is less than a fifth of their historic range.

To help bring back these rare rabbits, N.H. Fish and  Game's Nongame and Endangered Wildlife Program is working with the U.S. Fish  and Wildlife Service and other partners to create more of the shrubland habitat  that New England cottontails need for food and shelter. In addition to the Stonyfield site in Londonderry, this work is occurring in  several areas in southern and central New Hampshire. Biologists have also provided supplemental  food for the rabbits during the winter months and are actively monitoring  areas where wild New England cottontails are known to still occur.

Another exciting part of the project is the Nongame  Program's partnership with the Roger Williams Zoo in Rhode Island, where nine  New England cottontails were born in a captive-breeding facility last year.  Last September, these rabbits were transported to a special outdoor enclosure  in Newington, N.H., at the Service's Great Bay National Wildlife Refuge, where  they spent the winter while transitioning to life in the wild.

Learn more about the New England cottontail at  wildnh.com/Wildlife/Wildlife_profiles/new_england_cottontail.html.

N.H. Fish and Game Department's Nongame and Endangered  Wildlife Program, celebrating its 25th anniversary this year, works to protect  over 400 species of mammals, birds, reptiles, amphibians, and insects and other  invertebrates. Visit wildnh.com/nongame.