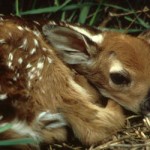 CONCORD, N.H. - With the arrival of spring, many species  of wildlife are giving birth to their young. Finding young wildlife can be  exciting, but in most cases, even if it appears abandoned, its mother is not  far off. If you encounter young wildlife - even young animals that appear  to need help - the kindest and safest thing to do is to leave them alone and  let nature take its course.

Reports have already begun coming in to Fish and Game and  local wildlife rehabilitators from people who have picked up young animals,  often mistakenly thinking they are orphans. "Picking up fawns, baby  raccoons or young animals is an error in judgment," says N.H. Fish and  Game Wildlife Programs Supervisor Kent Gustafson.

"People think they're  doing a good deed, but they are often removing the animal from the care of its  parents and potentially exposing themselves to the risk of disease. In  particular, your actions may result in the animal having to be euthanized for  rabies testing."

Young wild animals (including mammals, birds, reptiles  and amphibians) typically have their best chance of surviving when they are in  their own natural environment, says Gustafson. What should you do if you find a  young animal? "Give wildlife plenty of space and leave them alone and in  the wild, where they belong," he said. If in doubt, report the location of  the animal to N.H. Fish and Game by emailing wildlife@wildlife.nh.gov or  calling 603-271-2461.

Gustafson explains that seeing a deer fawn alone, for  example, does NOT mean that it is orphaned or that it needs your help; it is  normal for a doe to leave her fawn alone while she goes off to feed , and in  many cases, the doe will not return until nightfall. Leaving the fawn  undisturbed, and where it is, gives it the best chance of being reunited with  its mother.

"Fawns are not defenseless creatures. Their cryptic  coloration, tendency to stay perfectly still and lack of scent are all  adaptations that help them survive," Gustafson said. Does are easy for  predators to detect because of their size and scent, so they keep a distance  from their fawns, except during brief nursing sessions, so that predators don't  key in on them. If sympathetic people handle or repeatedly visit a fawn, it  only serves to draw the attention of predators and discourage its mother from  returning.

"This hands-off and keep-your-distance policy also  applies to bear cubs and moose calves," Gustafson continued. "It's  also worth noting that sows and cows can and do actively protect their  young.  In any case, if you're lucky enough to see a deer fawn, bear cub,  moose calf or other wild animal, count your blessings and leave the area." Only qualified people with special rehabilitator permits,  issued through N.H. Fish and Game, may take in and care for injured or orphaned  wildlife. Improper care of injured or orphaned wildlife often leads to their  sickness or death. For example, under NO circumstances should anyone feed a  fawn. Improper foods such as cow's milk invariably lead to severe diarrhea  (scours), which is usually fatal. Unless you have rehabilitator credentials, it  is illegal to have in your possession or take New Hampshire wildlife from the  wild and keep it in captivity.

The New Hampshire Fish and Game Department is the  guardian of the state's fish, wildlife and marine resources and their habitats.  Visit wildnh.com.